As we approach the end of a rollercoaster 2020, how are the economies of Latin America faring? In this report we provide a status update on the region.

Unsurprisingly, Argentina leads the pack in absolute inflation, with a September CPI of 35%, down from a June high of 41%, but still nearly four times the next nearest country, Uruguay. Argentina has implemented a complete closure of the country to outsiders, which has battered the important tourism sector.

Brazil, meanwhile, while keeping a relatively low absolute rate, has had the sharpest increase in the CPI index, up 66% between June and September. This has been felt by the population through higher prices for staple foods, prompting government action to attempt to stabilize these prices. 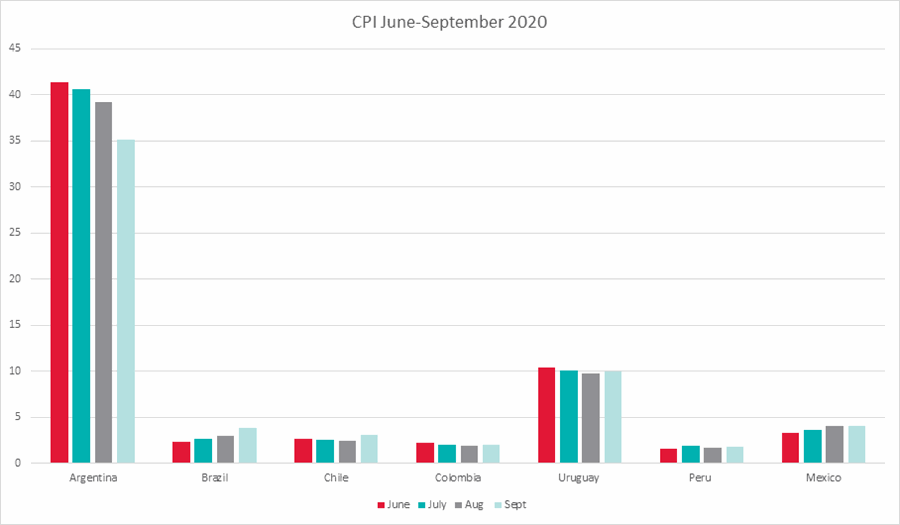 Labor has suffered greatly in Latin America, as the unemployment figures show. Excluding Mexico, most major countries in the region have had precipitous increases in the number of unemployed. Some governments, like that of Brazil, have attempted to mitigate this through government payments to certain groups deemed most at risk. Chile and Colombia, with significantly more strict lockdowns than Brazil, posted 70% and 83% higher unemployment rates than during the same time last year. Brazil, which had a stagnant unemployment rate of around 11% last September, saw that number increase to 13% in September. 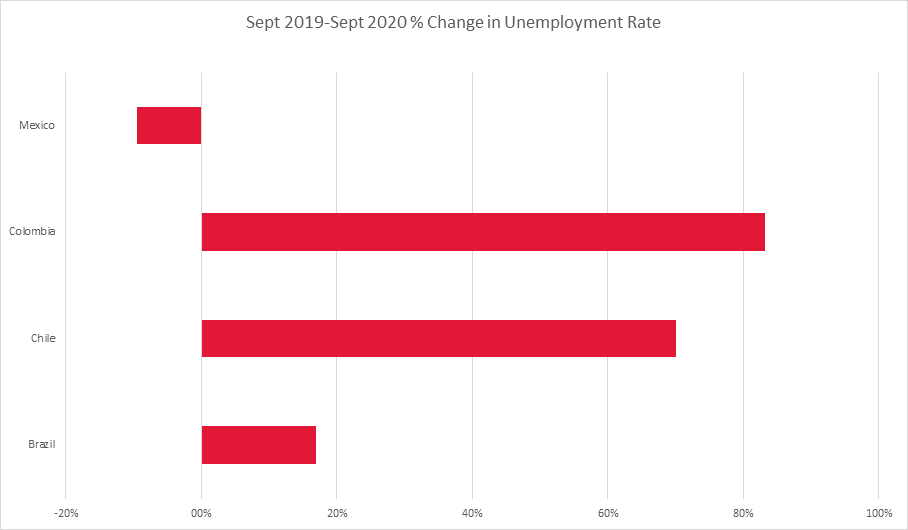 As lockdowns and cost pressures have spurred businesses to invest in technological solutions, labor recovery may face significant pressures in its recovery to pre-pandemic rates. 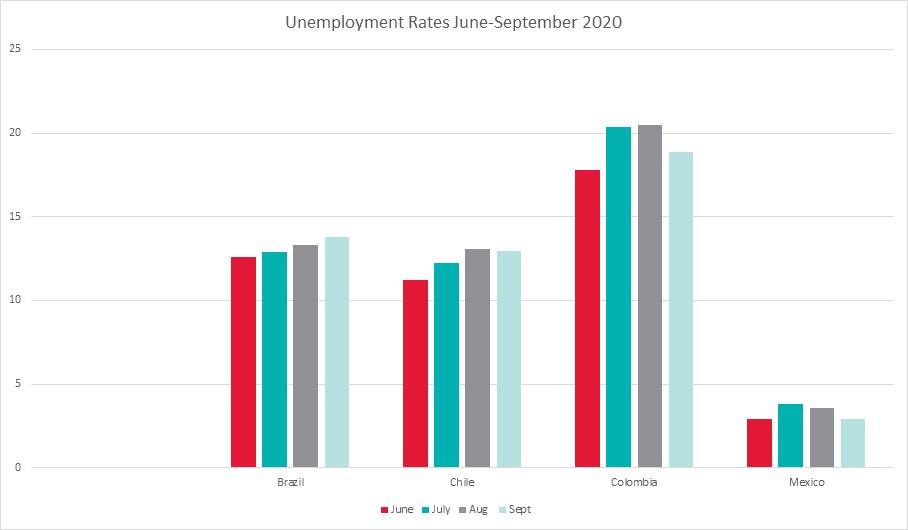 Currency Strength against the US Dollar 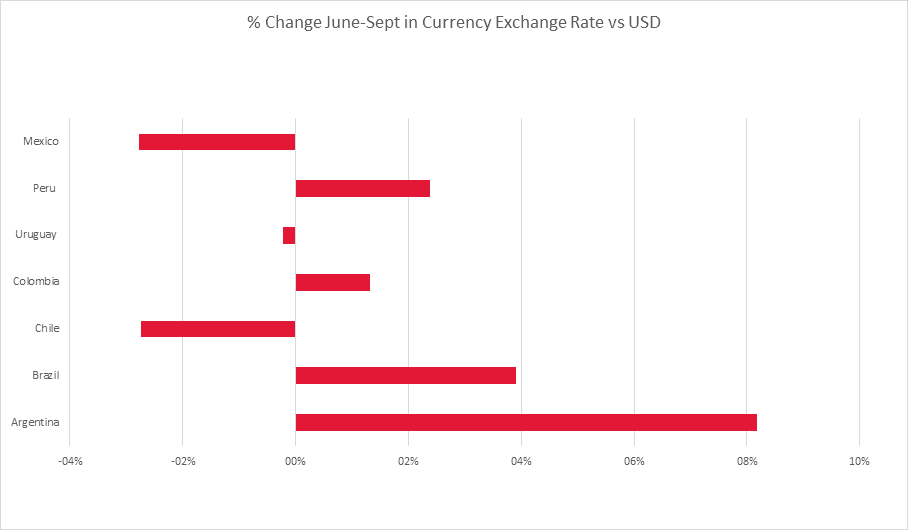 Annualized YOY% GDP growth provides a good background against which to visualize the changes in macroeconomic growth among countries. The second quarter of 2020 provided the most dramatic modern decline in GDP during peacetime. Brazil registered the lowest decline of the cohort at -11%, while Peru led the pack during the quarter with an astounding -30% annualized YOY drop. Mexico and Colombia had intermediate declines of 18% and 14%, respectively. 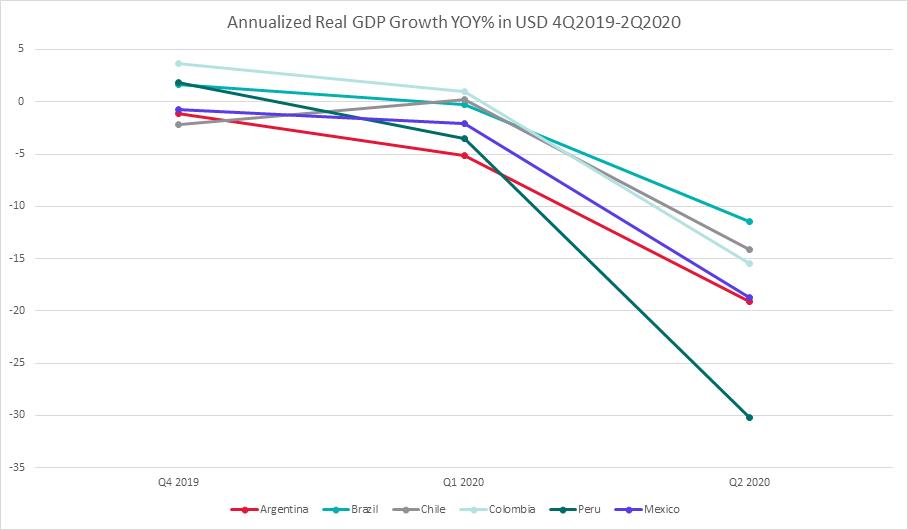 Given the difficult macro-economic situation across the region, how are Latin American companies doing in terms of value corporations? The following data comes from our October study of the top five hundred largest (by market capitalization) publicly traded corporations in Latin America between January and the end of September 2020. 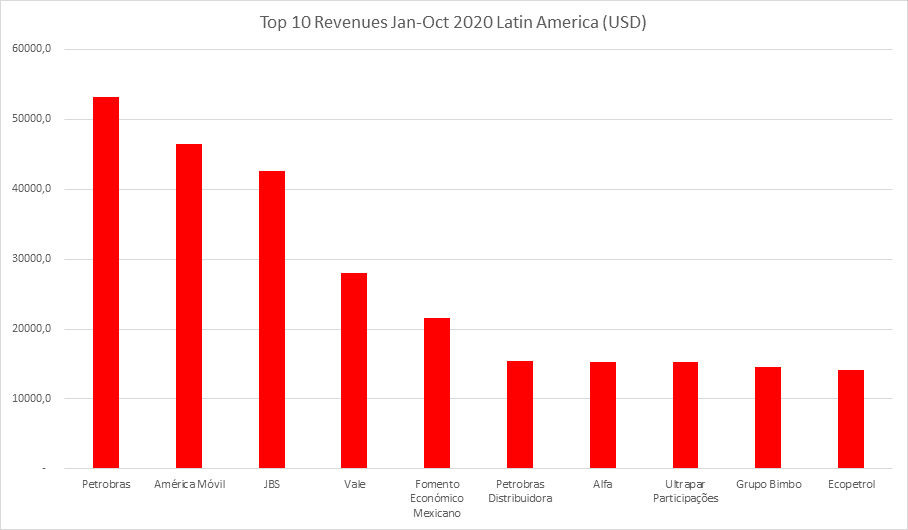 In terms of market cap, the big winner so far this year has been Argentina’s Mercado Libre, rising to a $63 billion market cap, earning it the title of largest company in Latin America. The entire market capitalization of the top five hundred Latin American companies stands just shy of $1 trillion as of September. 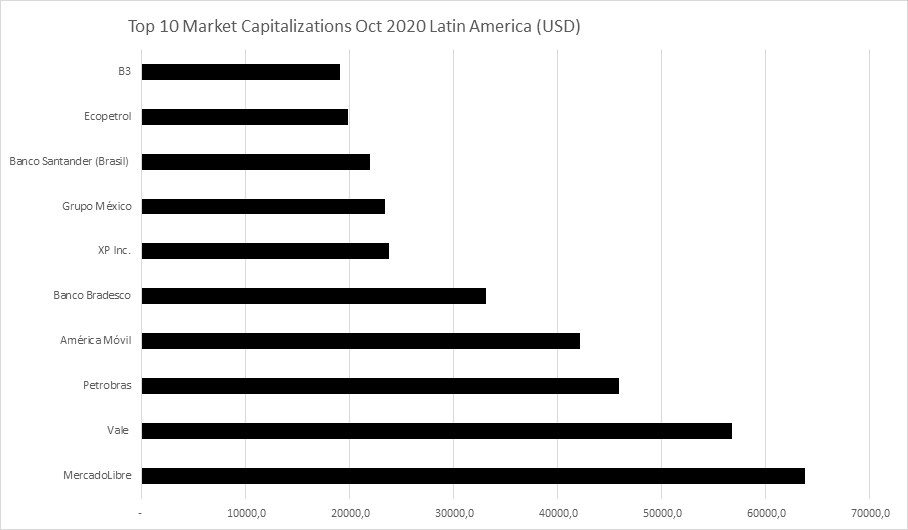 Meanwhile, the region’s total aggregate Market Value Added so far this year comes in at about $330 billion. Again, Mercado Libre leads the region with an MVA of about $63 billion, representing almost its entire market cap. Brazilian and Mexican companies dominate the top performers in terms of MVA, accounting for $123.4 billion and $56.4 billion in MVA, respectively. 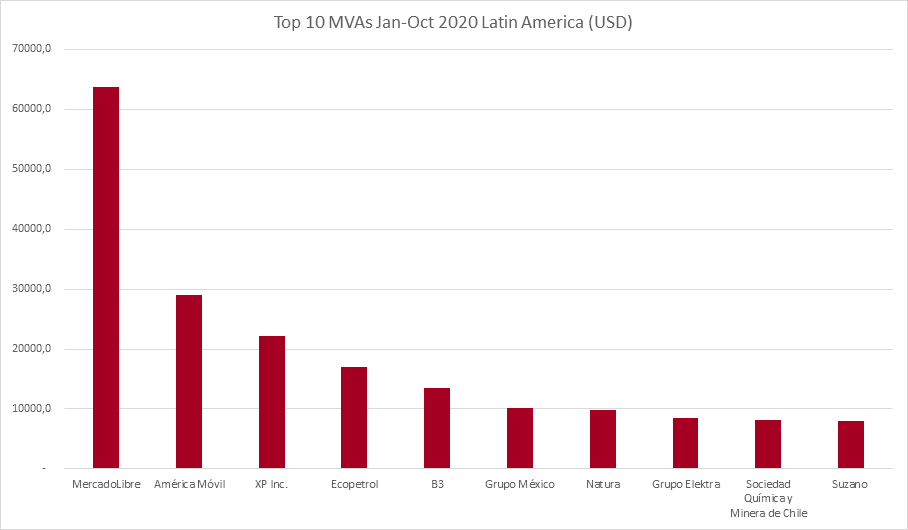 Overall, the aggregate of the top five hundred publicly traded companies has had, not unexpectedly given the pressures brough on by the pandemic, a tough year in terms of value creation; the region has booked a negative $73 billion in EVA, indicating a massive destruction of value for the year. Brazil’s JBS is the leader in value creation so far this year, generating $1.5 billion in EVA. Banks across the region have also demonstrated solid, positive EVAs despite the crisis.

What are the drivers of these top EVA performers? Let’s take a look at Latin American banks. Banks in Latin America are the world’s most profitable over the past decade due to high regulatory entry barriers for competitors, high interest rates, and among the highest margins in the world on consumer services and products. Further, Latin America still has a large unpenetrated market for banking services, allowing expansion, which industries in saturated markets cannot have.

In addition to the financial sector, technology, gas and minerals, and companies that provide essential goods and services have been clear winners during the pandemic. High consumer demand and need, digitalization, lowered costs of capital and low interest rates, and cost reductions have allowed these companies to generate positive wealth creation for shareholders. 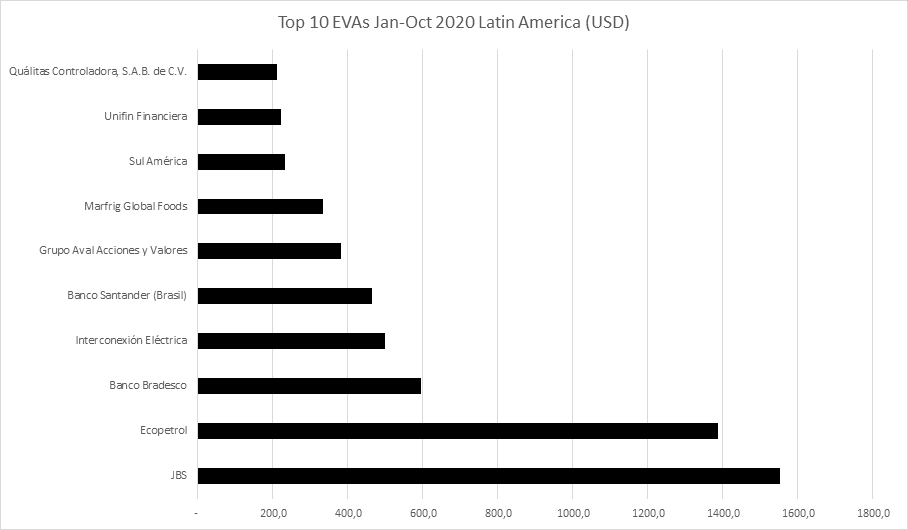 As the year comes to a close, companies will continue to face ever-evolving challenges to adequately allocate capital in order to foster value creation for shareholders. Latin American companies, despite dealing not only with a pandemic but also with serious systemic issues of corruption, excessive regulation, and underdeveloped markets, have shown themselves very resilient. With disciplined decisions around capital deployment, Latin American executives can enter the upcoming year better positioned to squeeze value out of every dollar in capital used.