In the 1990s, our firm compared the performance of Kmart and Walmart. Kmart was the decades-old staple of American retail, a creator of its industry and a survivor. Walmart was the upstart with a new business model, investing more cash than it generated in new stores across America and in select overseas markets. Our analysis showed that Walmart had thrashed Kmart over a two-decade period, creating much more value—and mountains more wealth for shareholders. The upstart David had beaten the Goliath of Main Street.

Walmart transformed relationships with suppliers, including those in China, while lowering prices and expanding choice and convenience for customers. Walmart set the standard. The company did not just beat Kmart and other retailers: it finished at the top of our Wealth Creation ranking of America’s thousand largest firms. This was just before the “dot.com” era began.

In 2020, we revisit the sector. The David of Bentonville has become the tired Goliath, while the new David sits in Seattle: the nimble colossus of Amazon. Just as the last two decades of the twentieth century belonged to Walmart, the first two of the twenty-first century belong to Amazon’s.

Amazon’s market capitalization has grown by 21 percent per year (compound annual growth rate), from $26 billion in 1999—when CEO Jeff Bezos was packing books in his warehouse—to $1.5 trillion today. Walmart’s has only grown by 1 percent per year over the same period, from $310 billion to $380 billion, albeit it did return $77 billion to shareholders in the form of dividends while Amazon has paid none.

Why the huge difference?

No firm has transformed an industry via the internet like Amazon. Amazon has moved Main Street into cyberspace. Yet, it was very different twenty years ago. The strategies and tactics that both firms have employed over the last two decades explain their relative positions today.

The “risky” start up, one of the few survivors from “web 1.0,” has become a sprawling interconnected conglomerate, connecting cyberspace and tangible businesses, with steadier cash flows and a large number of high-quality assets. The firm has mastered its original business areas, but the financial markets expect even more from its newer investments and initiatives not-yet-developed. These growth opportunities represent a significant percentage of Amazon’s valuation. Amazon’s ability to continuously create new opportunities and its remarkable track record of converting these opportunities into steady cash flow has given it a significant advantage over competitors: it is the main driver of its valuation. 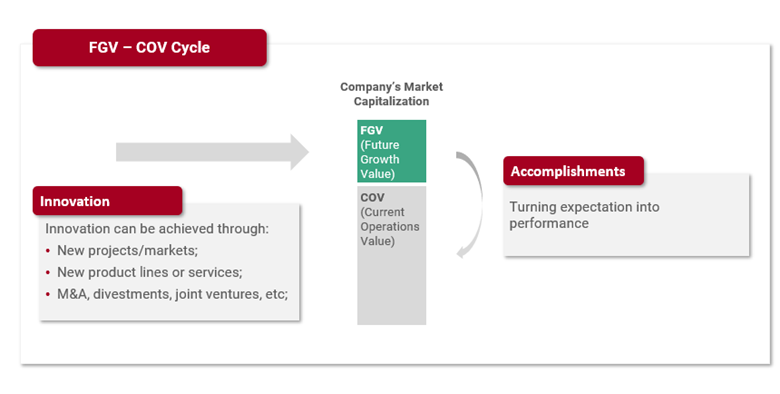 Amazon’s evolution can be divided in three phases. The first was one of creation. The second two were of transformation and reinvention. Each has been an important part of Amazon’s chartered path. The first was the start-up phase with the focus on books and electronics. The second was the “everything store” phase. The third includes the explosion of Amazon Web Services (AWS) and its foray into brick-and-mortar retailing, which was exemplified by the acquisition of Whole Foods Market in 2017.

During the first phase, Amazon’s top line grew fantastically, as the firm invested in expanding its capacity. In the second phase, the company had positive operating profit; all of its annual cash flow was reinvested into international markets, warehouses, and the data centers that became AWS in 2006. Finally, in the third phase, Amazon is creating billions value for shareholders, as measured by Economic Value Added (EVA®), while continuing its revenue growth at more than 20 percent.

During this same period, Walmart has only made incremental changes, going “all in” on Sam Walton’s operating model. The firm has hardly invested in its online capabilities: only in 2016 did Walmart finally buy jet.com. It has barely diversified beyond retail with the exception of a few notorious failures (Vudu comes to mind). The “legacy” business seems to be an anchor holding back the firm from making radical changes: the company has doubled the number of employees and tripled its number of stores and assets over the last two decades. This has led to tripling sales, but the top line growth and capital investment has had only a marginal effect on the enterprise value.

Walmart is unlikely to disappear anytime soon. Some 95 percent of Americans still shop at Walmart at least once a year, and even if that number were to decrease significantly, Walmart will probably survive. Its move into healthcare should keep people coming to its stores, and its proximity to customers allows the company to deliver to much of America with ease.

Few great companies remain successful over more than a decade. Those that do reinvent, reconfigure, and never rest or think that they have won: Coca Cola, IBM, Berkshire Hathaway are among those that prolonged their comparative advantage.

Amazon has had a roaring two decades; it and Google are the stars of the original internet. Even more is expected of Amazon in the future, including from business areas it has not likely even contemplated. Investors have faith in the people, the franchise, and the business model to deliver. But, if the firm becomes complacent, then this exercise in 2040 will likely champion a new competitor, possibly one that does not yet exist.