Over the past few years the global economy has been riding a roller coaster.  The most recent financial crisis first started in the United States during the summer of 2007.  The total market value of publicly traded companies around the world reached a high of $63 trillion on October 31, 2007.  But sixteen months later, by early March 2009, the value had dropped by more than half to $29 trillion. This wealth loss of $34 trillion globally is more than the 2008 annual GDP of the US, the EU and Japan combined.  In the US, NYSE Euronext (US) market capitalization was $17 trillion in June 2007, but subsequently fell by almost half to $8 trillion by March 2009.  US households lost almost $8 trillion of wealth in the stock market on top of the $6 trillion loss in the market value of their homes.  The total wealth loss of $14 trillion by US households in 2009 was equal to the entire 2008 US GDP.  Other regions did not fare much better: in 2008, market capitalization in EMEA (Europe, the Middle East and Africa) and Asian economies lost a combined $20 trillion.

The millions of households worldwide and shareholders of public companies suffered tremendous losses.  But who should be blamed for the damage incurred?  Have CEOs and Chairpeople of public companies been held responsible for their companies’ performance?  To shed light on this aspect of corporate governance, Stern Stewart & Co. investigated the relationship between financial performance and leadership tenures of the top 100 public companies in each G7 country (i.e. G8 excluding Russia due to insufficient information) over the five-year period of 2007-2011.  We expected more leadership changes to occur at bad performers than good performers in soundly-governed companies where CEOs and Chairpeople are held accountable for delivering shareholder value.

First, we used the Wealth Added Index (WAI), a proprietary performance metric of Stern Value Management, to gauge the financial performance of the companies.  WAI is a period measure that reflects the wealth created for all shareholders over and above their risk-adjusted required return.  We ranked the largest 100 publicly listed companies in each G7 country in terms of their WAI results from 2007 to 2011 and compared the leadership changes in the top 20 and bottom 20 wealth creators.  Our results in Table 1 show that in general, bottom 20 companies were more likely to change leadership than top 20 companies in G7 countries.  But only in the UK, France and Italy were there significantly more changes in CEOs and/or Chairpeople at poor performers than good performers.  For example, in the UK, 70% and 80% of the bottom 20 companies changed CEOs and Chairpeople, while only 15% and 40% of the top 20 companies changed CEOs and Chairpeople, respectively.  Leaders at British companies were much more likely to leave if wealth was not created for shareholders.  In contrast, the differences in leadership change between top and bottom performers were not as pronounced for the other four countries: Japan, Canada, the US and Germany. 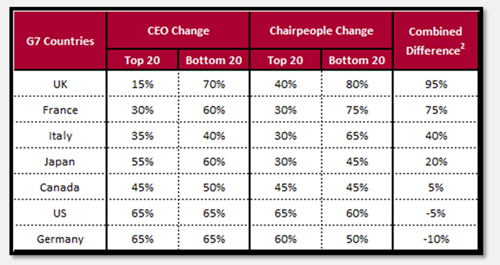 Table 1. Leadership change in top and bottom 20 performers in G7 countries in terms of WAI

Is it possible that CEOs and Chairpeople in Japan, Canada, the US and Germany were held accountable for company performance metrics other than wealth creation as measured by WAI?  To answer this question, we compared differences in leadership changes between top and bottom 20 companies of the four countries in terms of sales growth, EBITDA growth, EPS growth, asset growth[i] and Total Shareholder Return (TSR).

In Canada, EBITDA growth was the major factor that determined leadership changes as CEOs and Chairpeople in companies with slowest growth in EBITDA were more likely to be changed.

Table 2. Leadership change in top and bottom 20 performers in Canada in terms of other financial measures

For German companies, we only observe significant differences in leadership change between top and bottom performers of TSR but not much for other financial measures, which indicates that CEOs and Chairpeople of German companies were held accountable for their companies’ stock price performance rather than accounting results.

Table 3. Leadership change in top and bottom 20 performers in Germany in terms of other financial measures

Likewise, TSR was the most important performance measure affecting the fate of CEOs and Chairpeople in Japanese companies.

Table 4. Leadership change in top and bottom 20 performers in Japan in terms of other financial measures

In the US, CEOs and Chairpeople seem to have been held responsible for TSR especially, similar to Germany and Japan.  If stock price did not perform well, company leaders were much more likely to be changed.

Table 5. Leadership change in top and bottom 20 performers in the US in terms of other financial measures

CEOs and Chairpeople are entrusted to serve for the interest of shareholders and accordingly should be rewarded or penalized based on the wealth they have created or destroyed for shareholders.  Therefore, companies in the UK, France and Italy had better corporate governance given that their leaders were held accountable for the wealth added to shareholders. That is, CEOs and/or Chairpeople were more likely to be removed if they did not create wealth for all shareholders above the risk-adjusted required return.  Meanwhile, Japanese, American and German companies mostly focused on Total Shareholder Return as a proxy for company performance.  In Canada, the tenures of CEOs and Chairpeople largely depended on the EBITDA growth instead.

The blind pursuit of high Total Shareholder Return without an eye on the risk taken on by the company is a sign of poor corporate governance.  If compensation and tenure are determined by Total Shareholder Return alone, company leaders will tend to take on more risks in order to achieve higher returns.  As we all witnessed, overly aggressive investment without proper risk control was one of the main causes of the recent financial crisis.  It is detrimental to shareholder value since shareholders bear all the consequences from poor corporate governance in the end.

Therefore, Stern Stewart & Co. strongly promotes the use of the Wealth Added Index, or WAI, as a management tool for corporate governance. WAI is a better performance measure than other conventional financial metrics since WAI corresponds to the real return shareholders have obtained after deducting the cost of equity.  It can discipline company leaders to always balance between risk and return when making decisions.